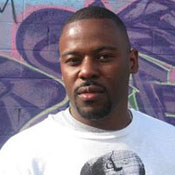 Infinito 2017 Marcellous Lovelace (Infinito 2017) an independent, self-contained painter and Unorthodox Poets Society member from the South Side Chicago. As a visual artist with over 8,000 + works of art and musician who has independently released over 200 albums and toured internationally with minimal backing. Has written over 15 books based on art etc...

Album(s) of the year?
Infinito 2017 – 'Conquest of The More: Vol 2. Everything Changed' (produced by The Geaux)
'Deliberate Enigmas - Feedback: No Excuses Proud Of My Skin Love Myself As I Am'
Infinito 2017 - 'Quality in Quantity' (produced by Mixx Massacre)
Sean Price - 'Mic Tyson'.

Movies, books or TV of the year?
'Red Hook Summer' by Spike Lee (movie)
'Prometheus' (movie)
'Root for the Villain: Rap, Bull$hit, and a Celebration of Failure' by J - Zone (Paperback)
'They Came Before Columbus' by Ivan Van Sertima (Paperback)
'Christopher Columbus and the Afrikan Holocaust: Slavery and the Rise of European Capitalism' by John Henrik Clarke (Paperback)
'The First Americans Were Africans: Documented Evidence' by Davis Imhotep Ph.D. (Paperback)
NBATV & ESPN...

What do you wish for the world in 2013?
Live this life to the fullest, don't take a day, a step, a thought, people and places for granted. Stop the wars and stop the killing worldwide!

What can we expect from you (and yours) in 2013?
I will continue to educate myself and grow, paint several art series including Ray Gun 1981 that visually communicates Americas war crimes against blacks. www.marcellouslovelace.com
Release: 2013 Marcellous Lovelace - Brash and Abrasive (Masculine Music)*
2013 Untitled Blank - Your Nothing is Not Worth Anything
2013 Marcellous Lovelace - Exposed Emotions In Color (Soundtrack)
2013 4th Dvd in the Regular Black Dude Format
2013 Marcellous Lovelace - Black Reality Not TV
2013 Deliberate Enigmas - Draw What I Want (prod by Kiza)
Plus other releases from my uncles label Joe Left Hand Records and Nephew of Frank Records
I will write several more art related books and travel to many more places in the world.